Governments are striving to accomplish more with fewer resources. Additionally, citizens are looking for governments to embrace the gov 2.0 movement, to become more transparent with allocated resources, and to increase communication and feedback. It is a lofty goal, but one that we feel will increase the effectiveness of government, while also improving citizens' experience. 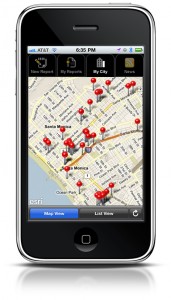 Rock Solid is a real time mobile civic engagement platform; By providing free mobile apps, we allow citizens to report non-emergency issues back to City Hall. By identifying these civic issues (public safety, quality of life, & environmental issues, etc.) with a smartphone, citizens are able to snap a photo, shoot video or record audio and easily report issues directly to the city's appropriate department. In addition, our mobile reports provide additional data points about the problem, most specifically the GPS location. From these reports, the city can then respond direct to the user to keep citizens informed of all progress.

CitySourced was conceptualized in Nov. 2006 and eventually launched in March 2008 as non-partisan political social network allowing its members to quickly and easily write letters to their publicly elected officials. In the summer of 2009, our team created the original CitySourced mobile application. Very shortly afterwards in September 2009, we officially launched the CitySourced product at the 2009 TechCrunch50. Fortunately, we're able to work with some great partners, such as Microsoft, IBM, and ESRI, who have helped us tremendously along the way.

Between Wikipedia, Kickstarter, and many others, crowdsourcing has delivered some amazing solutions; we want to apply the same magic to the public sector. We think we're pretty unique in applying this model to the public and encouraging civic engagement. While we currently focus on public works issues, our vision is to ultimately transform civic engagement. By energizing citizens around public issues, we hope to further connections between the two groups. That's our hope.

From our early beginnings, we have focused relentlessly on developing our app for iOS, Android, Blackberry, and Windows 7. While that may seem like a technical issue to most, to us it is core to our offering. We realize that we have to be accessible across as many different platforms as possible if we want to include everyone in our crowdsourcing efforts. Mobile development on so many different platforms and devices can cause a headache, but it's super important for us to be as open and accessible as possible.

Author Info: Jason Kiesel was the Founder and CEO of CitySourced and is now the current Chief Product Officer of Rock Solid. Prior to launching CitySourced, Jason operated Kiesel Media Group, a web development company which architected and developed CommerceComposer, a highly scalable e-commerce platform. Additionally, Jason has been hired as a software engineering consultant for Fortune 500 companies such as MySpace, Disney, Transamerica, & Universal.