Harford County residents now have a more high-tech way of reporting potholes, dead animals, flooding or other problems to the county government. Residents with smartphones can get a new mobile app called "Harford County Connect" to inform county officials of their public issues. The mobile app, unveiled by Harford County Executive David Craig, allows users to take photos, record video and audio of a problem, and automatically provide GPS coordinates. After the report is submitted, users can track all reported problems on a map as well. 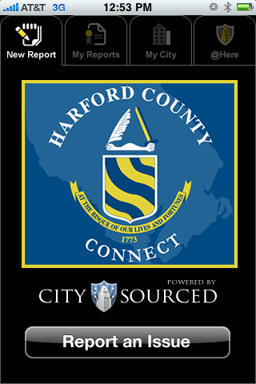 The app is available for the Apple iOS, Android, BlackBerry and Windows smartphones. The website, where residents can also report problems directly without a smartphone, is http://www.harfordcountymd.gov/Rock Solid.