Kamloops, BC – The City of Kamloops is excited to announce the launch of its first mobile application with the new “myKamloops” app. This free app, developed by Rock Solid (previously CitySourced), is intended to act as a Report A Problem channel, allowing residents to report civic issues of concern, whether it be graffiti, potholes, fallen trees, overflowing garbage cans, obscured or fallen signs, or any similar issue. 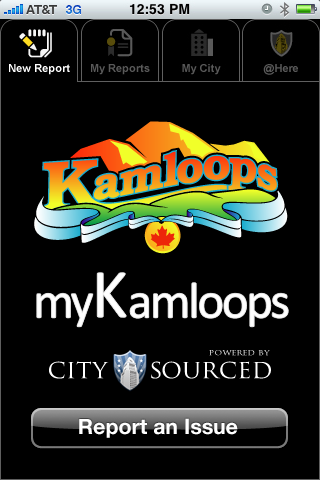 While this new app does not replace the current methods of reporting a problem via the phone, email or website, it does allow people to report issues quickly and conveniently using their Smartphone, including iPhones, Androids, Blackberries and Windows Mobile. Smartphone capabilities allow for residents to report issues via a photo or video, geo-tag it, and submit it to the City very quickly. The issue is then routed to the appropriate City department for resolution.

The app can be downloaded from the Smartphone’s store or marketplace by searching for ‘myKamloops’. Additional information on this service and links to download the app can be found at www.kamloops.ca/mobileapp.

myKamloops makes it very easy for residents to place service requests or report issues. With a simple click on a phone, residents can send a photo clearly illustrating the cause of concern and location. That’s citizens helping the City to make our community a better place. - Adam Chadwick, City of Kamloops GIS Manager.

For those residents without a Smartphone, this app will be available through Facebook as well, to simplify the Report A Problem process. The City’s Facebook page is located at www.facebook.com/cityofkamloops.