The city of Peoria launched a new Smartphone application which allows citizens to identify and report non-emergency civic issues, such as public works, quality of life, and environmental issues. This mobile reporting platform will improve how Peoria delivers services to its neighborhoods.

PeoriaAz Civic Reporter allows a user to capture a photo, video, or audio of the problem. The user then uploads the media and, along with GPS location information pulled directly from the device, submits a report directly to the city's appropriate department. Once a report is submitted, feedback is provided to the user based on the action taken by the department handling the report. 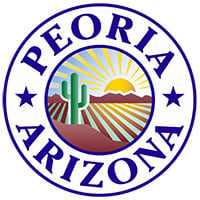 Civic Reporter helps us be smarter, faster and better in how we manage citizen reports and fix problems. This application lets us see what the resident sees and gives us an exact location. We will know immediately how to respond to the issue. - Director of Public Works-Utilities, Bill Mattingly

Using PeoriaAz Civic Reporter allows the city to use technology to save time and money, while improving accountability to Peoria citizens. In addition, the application verifies that the item being reported is within the city boundaries. If there is a pothole, for instance, outside the city boundaries, the GPS tracking service from the device the sender is using will identify the location of the issue being reported and notify the sender.

We are using an application which was tailored for the needs of the City of Peoria by the Rock Solid (previously CitySourced) organization. Peoria is surrounded by other cities with boundaries that are not always obvious to residents and visitors, so we needed a tool which would allow us to be specific about issues affecting only Peoria.  The PeoriaAZ Civic Reporter will allow us to do that, using GIS maps provided by the City of Peoria’s IT GIS group and married up with the technology that Rock Solid provides. - Chief Technology Officer, John Imig

The application is an efficient way to report nuisances, dangerous roads, and broken traffic lights, as well as many other items the city can address. The app does tell you that if you have a real emergency, you should call 911 and will prompt you to do so with a button.

Peoria residents can download the PeoriaAz Civic Reporter application to a phone, iPhone, Android, Blackberry, and Windows Phone, by using app store on their device. For residents who don't use or have a SmartPhone, reporting of city streets or environment issues may still be submitted online at either www.peoriaaz.gov or by calling 623-773-5150.

Use PeoriaAz Civic Reporter for the items listed: