Behind the Scene: Preparing for 2017 #CityHallSelfie Day

In our Guide to Celebrate #CityHallSelfie Day we discussed how the day is all about celebrating public service in a fun, modern way. Here's a look behind the scenes of our day as it unfolded and lessons learned for next year. Plus, check out our highlight video:

Our goal from the beginning was to have fun, but we also had a competitive side that told us we should go for the 1-Day Record. After checking with Kirsten, we found out the previous record was 13.

Nope - last year, @MeredithHauck toppled that record with 13. Lace up your running shoes, gas up your car... https://t.co/fqKLUviowS pic.twitter.com/qlakixlFe7

Luckily for us, the County of Los Angeles has 88 incorporated cities! We believed we were in the prime position to smash that record (we had no idea the insanity of other participants trying to break the record )

But we also wanted to make sure that we showed others how interesting and diverse our hometown truly is. Many people outside of Los Angeles have a very one-dimensional view of LA and we believed we could play a very small role in changing that perspective.

In all honesty, we discussed the day over the previous several weeks but we didn't have our first planning meeting until August 7th. As a team we use Asana to plan and execute our activities.

There are no two ways about it, Los Angeles is a place that you want to plan your travel very carefully. After creating a list of cities that we could visit we put together three different routes before settling on our final route of 20 cities. 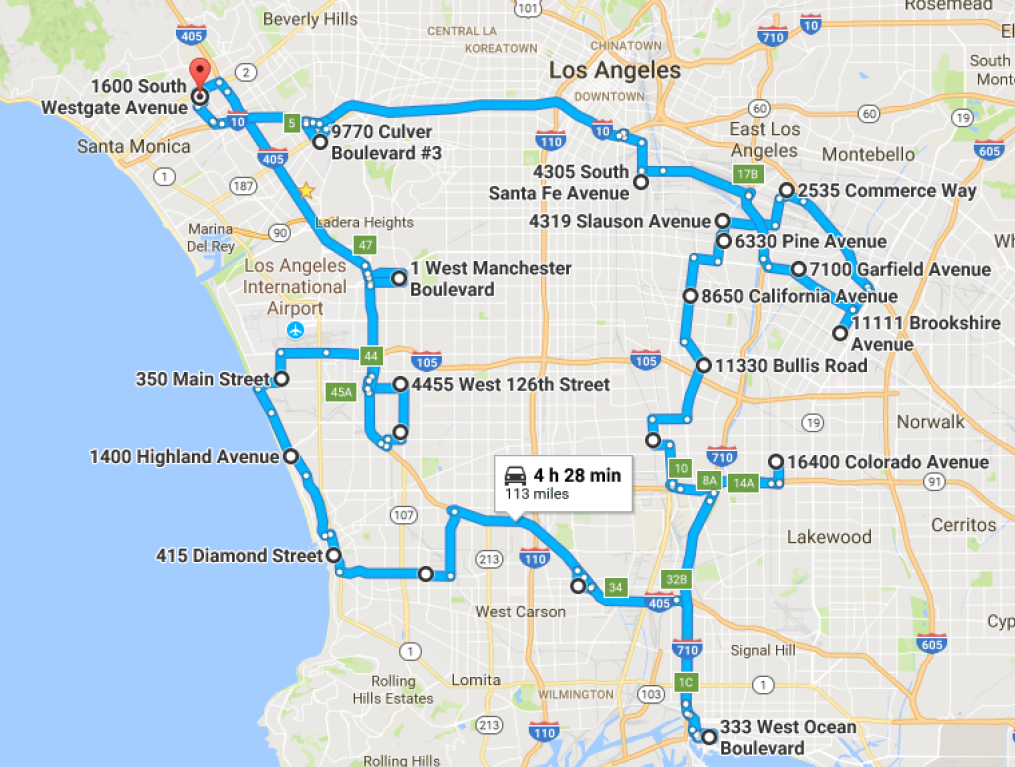 But we also wanted to dismiss this idea that LA is a car only place. Many of us here at Rock Solid (previously CitySourced) use Alternative forms of transportation and we are big believers in its impact in improving lives at the local level. Therefore, we wanted to show this side of our hometown and incorporated both LA Metro and biking into our travel, in addition to using a car.

It was late in the afternoon when our dreams of record-setting glory were officially pronounced dead thanks to checking our progress on Twitter.

And we're informed that we are won't going to be setting the record on this day. Have no fear we were going to get the record West of the Mississippi!!!....
then we learned about the myth and legend that is the Sarah Gamblin-Luig aka @SirenLadySTL, who eventually got 50! At this, point, we realized our 18 in one day is now probably considered a warm up.

We're really pleased and happy about the results but we definitely got into the game late with only one week of official planning. IMHO, it's not too late to start putting together plans for City Hall selfie Day 2018.

In a similar vein to #1, we would reach out to local cities earlier. As much fun as we had running around and taking solo selfie, the highlights of the day we're definitely at the cities that participated with us. We fee like part of the ELGL Community, but we're always a little self-conscious that as a vendor we might be crashing the party.

We did a lot of work in advance of the day to announce the big day, but we put more effort into Instagram. After reviewing the results, it seemed like Twitter was actually much more active; we're always exploring new channels, but it seems that Twitter was the digital home for #CityHallSelfie day.